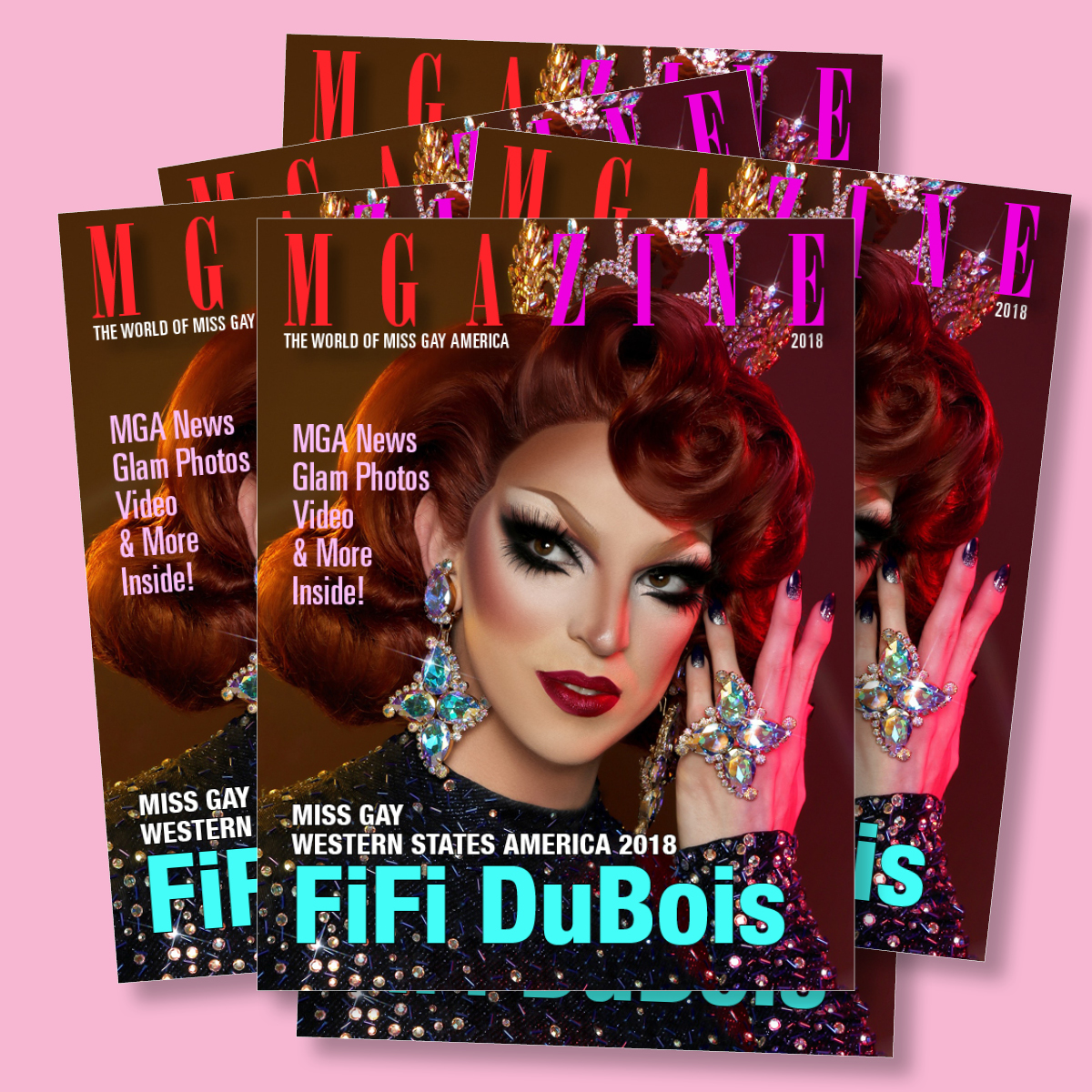 Meet Fifi DuBois, your reigning Miss Gay Western States America 2018. Thanks to the generous admissions policy for "open regional" pageants, it is a New Yorker under that crown. (Nice to see more East Coast girls in the system!)

Uptown, downtown, all around town performing, Fifi DuBois has not only talent, but nerve: she takes the subway to gigs in full drag. (Keep track of her gigs via her Facebook page.)

In 2016, Fifi won her first crown (below), that of Miss'd America, a fundraising completion put on by the Greater Atlantic City GLBT Alliance that donates thousands of dollars to local organizations. Great videos of the pageant and Fifi here.

To make a short story longer (but aren't you curious?) when asked how she came to be Miss'd America, Fifi recounts, "I had seen a that a few of my NYC drag sisters had been competing in this big scale pageant in Atlantic City and was thoroughly intrigued. So I did my research and found all you had to do was apply and be approved to compete. So during my 6 month contract with a cruise ship as a dancer I applied and got accepted to compete only a couple months after my contract was up. I competed didn’t place but had such a spectacular time I went back stepped my game up and placed top 3, and I said to myself that’s it next year it’s mine to lose. So, I took the year to prepare– even turned down other pageants to focus on Miss’d–and won on my 3rd try in 2015/16. As Miss’d America I got to participate in a lot of great event in Atlantic City and travel the east coast for various pride parades promoting the pageant and scouting for contestants." (You can check out Fifi Dubois at Miss'D America on Getty Images here.)

Clearly that focus, practice and dedication to being a great entertainer–which is what Miss Gay America is all about–paid off: Hello Miss Gay Western States crown!

So how does a New York City girl get crowned Miss Gay Western States America? "I had competed in my first prelim (Miss Gay New York America) and caught the MGA bug and was convinced by former MGA Suzy Wong to do Miss gay Western States, the prelim she was representing when she won.  Even in my short time with MGA I was told of Daniel and Nick’s stellar reputation, which since winning has not been lived down." 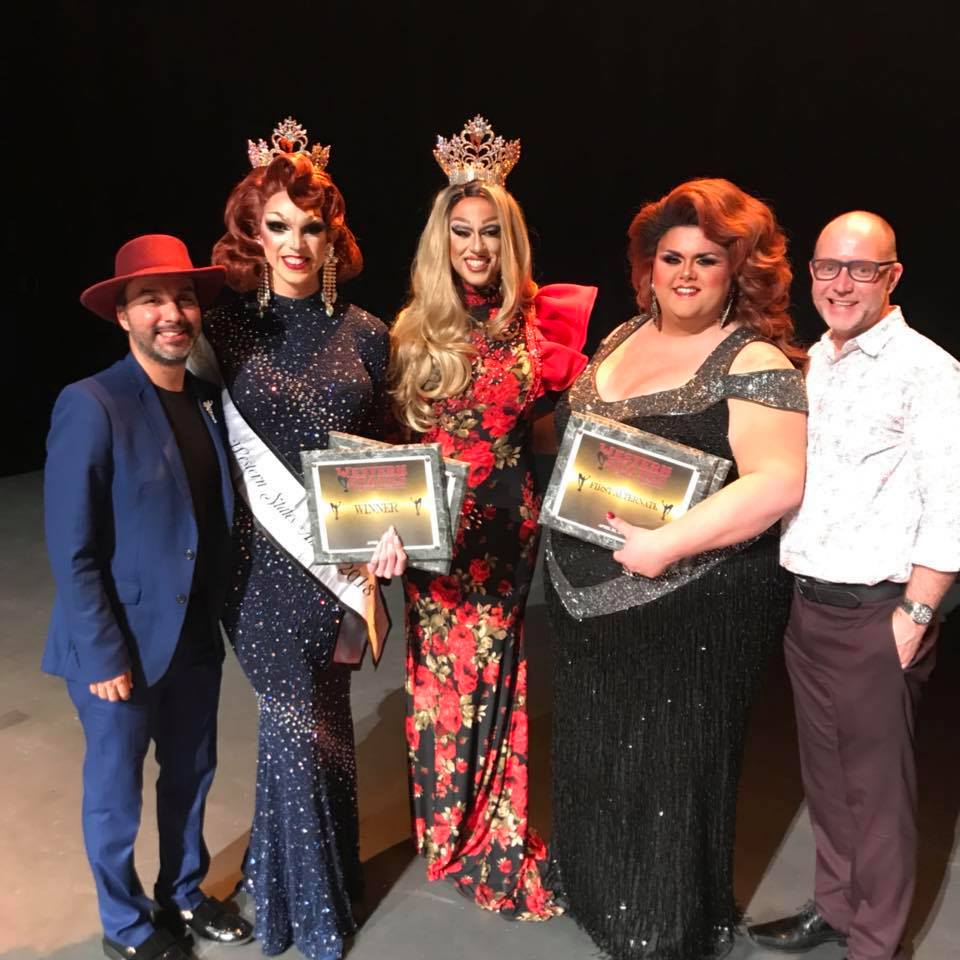 
About her drag name, she says, "I chose the name FiFi DuBois because I wanted a name that sounded like an obvious stage name. Plus both names have multiple meanings and definitions but I won't go in to detail on that, you'll just have to google it."

Now to the 5 Questions:

I first started doing Drag as a part of a competition in college. I grew up as a dance competition kid (i.e. "Dance Moms") so I went in for the competition and ended up falling in love with the art form.
Read more »
Posted by AndyPopularPublicity at 6:04 PM 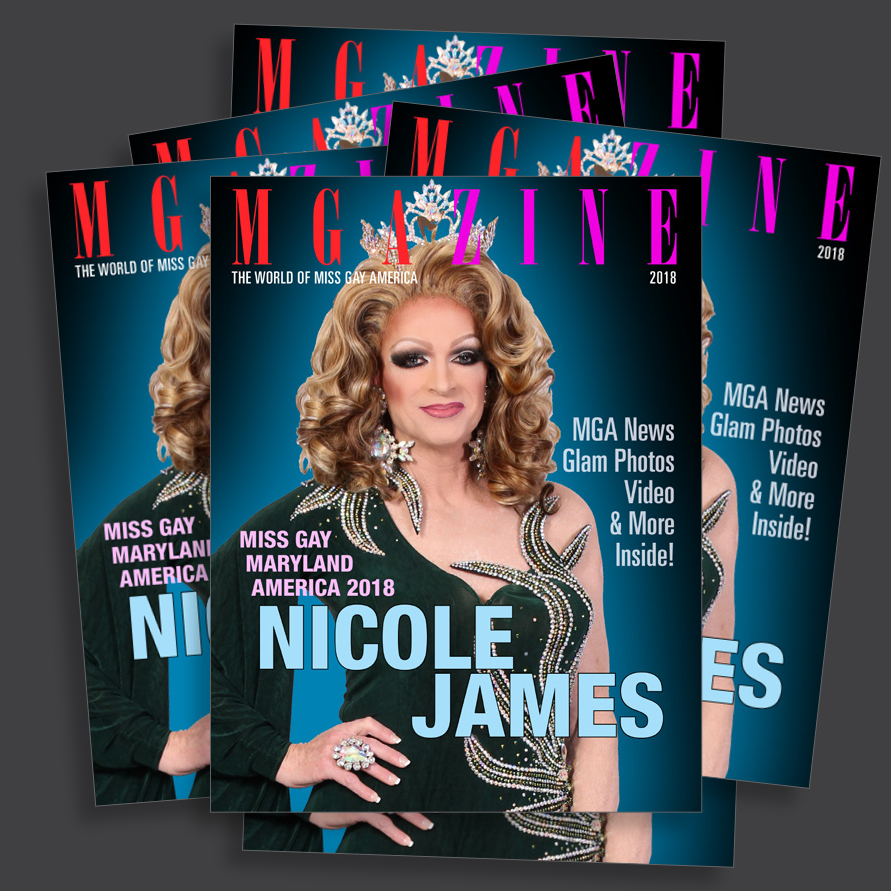 Meet your Miss Gay Maryland America 2018 Nicole James, of Martinsburg, West Virginia. She was thrilled to compete and ever more thrilled and grateful to be crowned. In addition to her fascinating and heartfelt interview below, read her impassioned Facebook post about getting back into the game and what its means to her here. Clearly, Nicole James is yet another one of the appreciative entertainers who "gets it," when it comes to the Miss Gay America system and legacy.

It's always interesting to know how a female impersonator chose her stage name. When asked, Nicole explained, "My legal name is Jimmy, hence James. Nicole is simply a name that I loved for some reason many years ago. And no one else had it, that I knew of. I was and still am still am very focused on trying to find the thing no one has done yet or in creating something no one thought of yet. I put this into my persona when I create costuming, hair and performances.  All these things are what make me still love being Nicole James, and now Miss Gay Maryland America."

Now to the interview: Nicole James in Presentation for the Kinky Boots theme

1 How did you get started, when did you first do in female impersonation?
I began my female impersonation career in 1987. It was at the height of the AIDS crisis and we needed performers in the western Maryland area to participate in the shows to raise funds for the local hospice and individuals that were in need of medications and assistance. I already had an interest, but had not pursued taking my craft to the stage until I was approached and asked to help out. 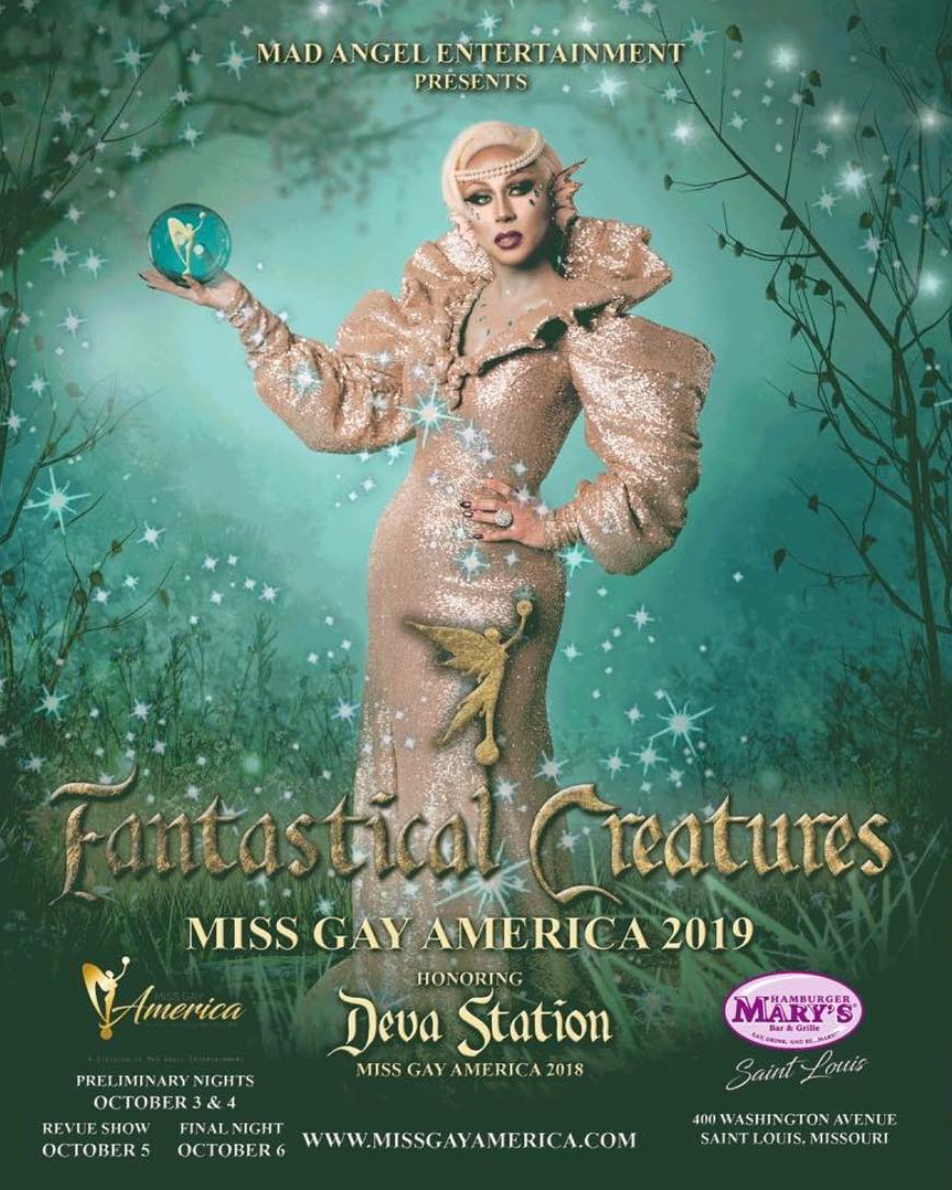 So, can we get a collective "Uh-mazing!" for this first glimpse at the Miss Gay America 2019 theme?!

As many know, every title holder gets to choose the theme for her step-down pageant. We've had a broad variety of themes recently, from "Kinky Boots" at Miss Gay Maryland 2018 to the dazzling "Showgirl" at the first Miss Gay Nevada to "Ohana," Hawaiian for "family" at the forthcoming Miss Gay Arizona 2018.

Great photo. Great theme. And we can't wait to see what the contestants do with it. So exciting!

Posted by AndyPopularPublicity at 4:57 PM 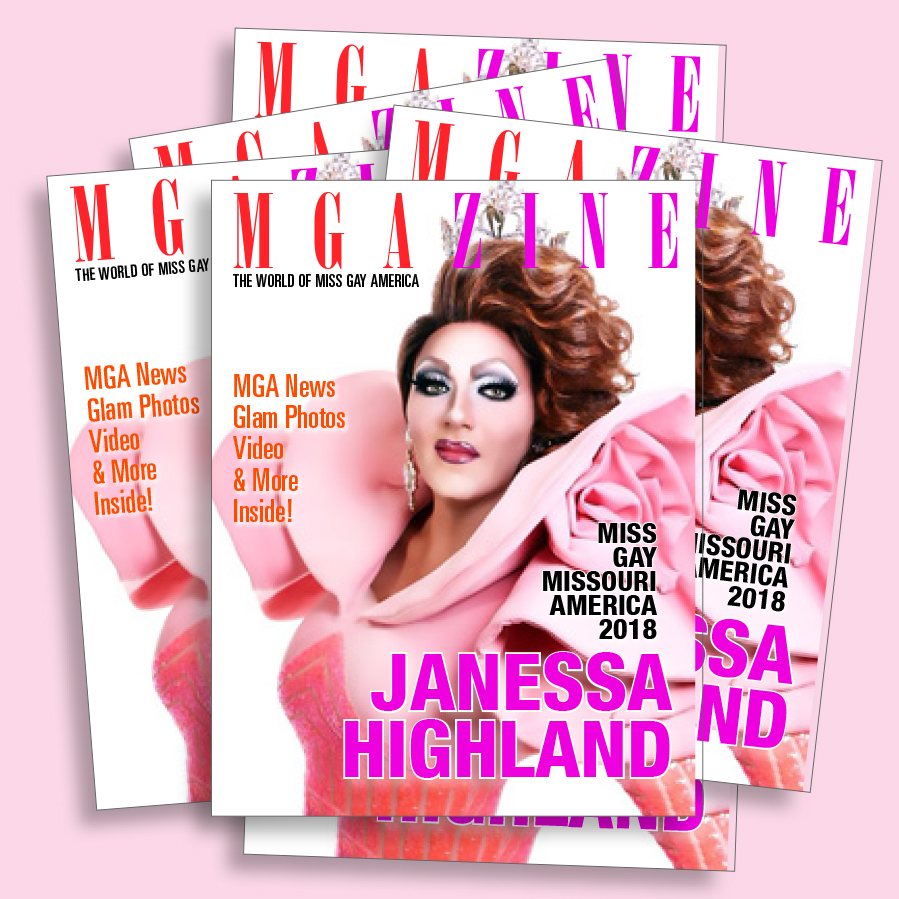 On April 7, at Hamburger Mary's St. Louis, the Miss Gay Missouri America pageant crowned their newest queen, Janessa Highland. An honor indeed, as the competition has been around since 1974, beginning only two years after the very first Miss Gay America pageant in Nashville in 1972.

No stranger to pageant competitions, Janessa's first title was as a "Mister," back in 2010. Thanks to being a "Mister" Janessa fluttered forth. She recounts her crysalis--and christening--as Janessa Highland:

"When I first started performing I was a go-go dancer at a bar but didn't want anyone to use my real name because I was in college to be an education major and didn't want it coming up on my social media later down the road. I picked the name Jace (because I thought it was sexy) and the last name Highland because it was the street I grew up on (Highland Lake Dr). When I started doing female impersonation I wanted my initials to be the same so I chose the name Janessa. So there you have it: Janessa Highland!"

Like many contestants and title holders, she appreciates participating in the Miss Gay America system not only because it has been invaluable in honing her skills as an entertainer, but for the life skills she has–if not acquired, certainly empowered–thanks to participating and the friendships she has formed with fellow contestants.

1 How did you get started, when did you first do in female impersonation?
I started my female impersonation career in Springfield, MO. I first hit the stage as a male performer Jace Highland and went on the capture the titles of Mr. Greater Ozarks Pride, Mr. Latin Vibe, Mr. Springfield and Missouri National Showman. During my reign as Mr. Greater Ozarks Pride I was asked to do a turnabout benefit for the AIDS Project of the Ozarks. It was this benefit in 2010 that lit the spark that created Janessa Highland. 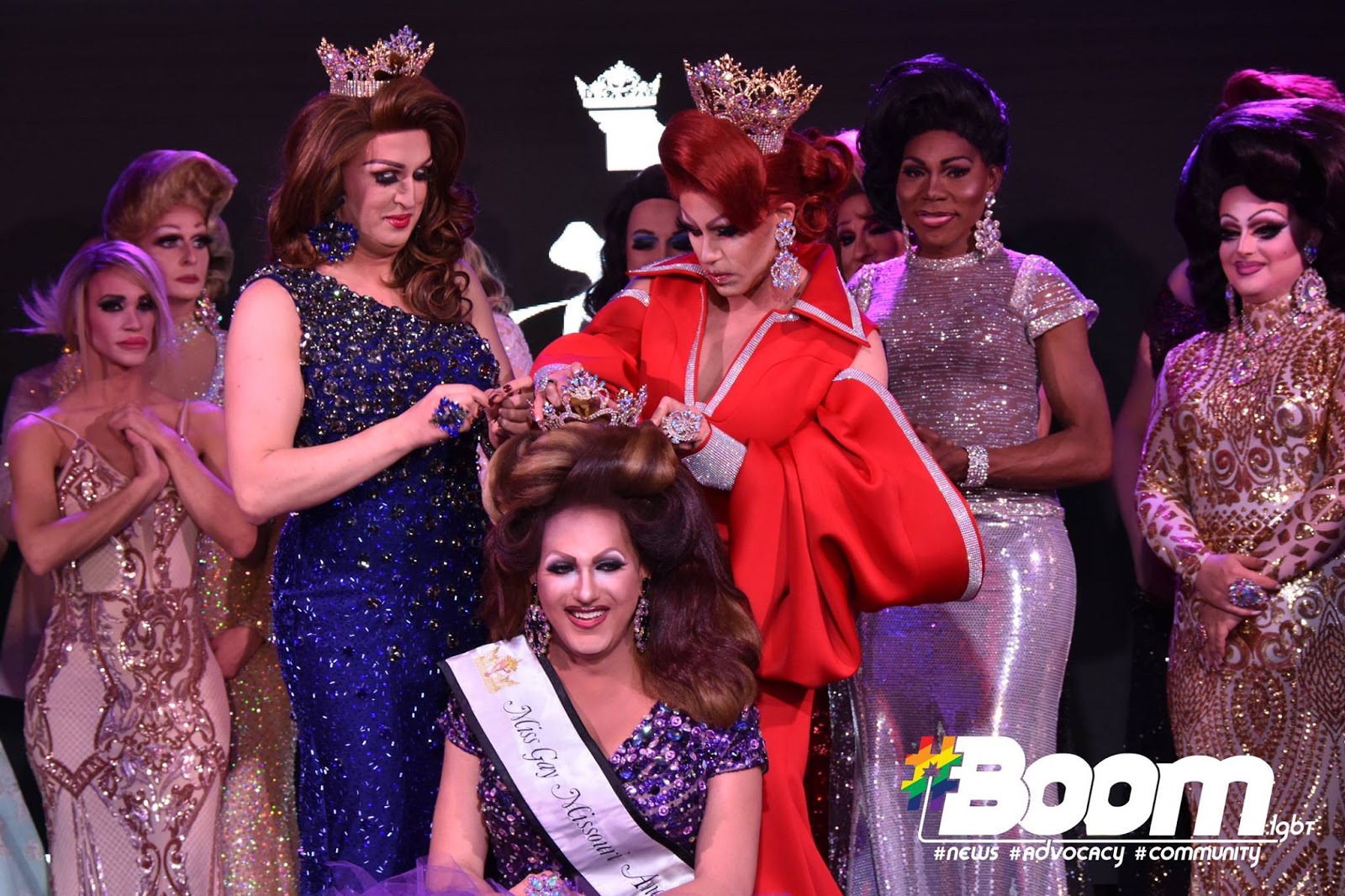